Trimix diving refers to the addition of helium, which is metabolically inert, to air in a scuba tank. Using Trimix allows a diver to easily extend her range from 130 feet to 200 feet or more! Trimix divers have even exceeded 1000 feet depth in seawater, but that sort of diving is best left to the most intrepid of ocean explorers. You may be wondering why a diver would want to extend their ability for diving, let us explain why.

​Trimix diving has increased in popularity, and that’s because it serves two main purposes.First, it substantially reduces the likelihood of experiencing nitrogen narcosis. Trimix does this by reducing the percentage of nitrogen in your breathing gas. Second, Trimix can reduce your chances of experiencing oxygen toxicity (referred to informally as an ox-tox hit). A certified gas blender can reduce the amount of oxygen in your breathing gas to as little as 18%.

Quick Navigation
Why would I need Trimix?
Is it safe to breathe Trimix?
How do I get certified?
Is it expensive?
What kind of equipment is required?
Which agency offers the best Trimix training?
How do I know if Trimix diving is for me?

Why would I need Trimix?

​Trimix diving, like other technical diving techniques, is not for everyone. However, if you’ve wanted to explore a deep water coral reef, or check out a deep ocean shipwreck, Trimix can provide you with an extra margin of safety.

​An example of a “bucket list dive” that can benefit from Trimix is the U.S. Navy aircraft carrier, USS Oriskany, which was sunk deep in the ocean as an artificial reef near Pensacola, Florida back in 2006. Part of this superstructure, or island, is accessible to recreational divers. However, the flight deck sits at around 145 feet deep, so if you want to explore the hull, you’ll need to become a more savvy scuba diver.

Is it safe to breathe Trimix?

Breathing Trimix is as safe as any other scuba related activity. In fact, you could think of Trimix as the diving equivalent of an automobile’s airbags. Dive medicine researchers have been experimenting with helium as a diluent since 1919. In 1939, the United States Navy confirmed that helium, as a component of a breathing gas does, indeed, prevent nitrogen narcosis. Between 1983 and 1987, the use of Trimix came into common use among cave divers.  In 1991, after decades of use in military and commercial applications, the first Trimix curriculum was developed for recreational purposes by the agency IANTD, the International Association of Nitrox and Technical Divers.

The safety benefits of Trimix actually transcend the boundaries of technical diving. Freedivers, that is, people who dive without the benefit of equipment other than a mask, a wetsuit, and sometimes fins, can reach depths of more than 700 feet. Rescue divers using Trimix are able to, and have in actuality, rescued freedivers at depths unattainable by divers using standard air cylinders.

How do I get certified?

Most training agencies offer technical diving training, including Trimix. These include, but are not limited to, PADI, NAUI, TDI, SSI, IANTD, and GUE. Agencies require a prospective student to have a minimum number of logged recreational dives, and often require that the dives have been undertaken in a variety of environments.

Each agency has its own training progression, but typically, for open circuit diving you will need to start with an Advanced Scuba Diver course as well as a Recreational Nitrox course, followed by an Introduction to Technical Diving course. Next comes Advanced Nitrox, Decompression Procedures, Helitrox, Extended Range and then finally Trimix. There is also an alternative training progression, if you want to use a closed circuit rebreather.

In a word, yes. However, it’s important to remember that every technical dive is considered a formal event. Introductory courses can be had for a few hundred dollars. However, advanced courses can cost thousands of dollars each. The reason is simple. Exotic breathing gases are expensive. Filling a set of 120 cu. ft. cylinders with Trimix can easily cost $250. Also, most technical courses will require the use of a dive boat.

What kind of equipment is required?

Technical diving, including Trimix diving relies heavily on redundancy. You will need at least three high performance regulators, one for each Trimix cylinder, and one more for your bailout bottle. In addition, you will likely need cylinders and regulators staged along the descent line for decompression gas. These are typically a blend of EAN Nitrox.

You will need a back-plate and wing type BCD, often with a backup bladder. You will also need a good quality mask, a backup mask, large fins, two multi-gas dive computers capable of switching gas blends during the dive, at least two lights, a surface marker buoy, a brass and glass submersible pressure gauge, an ascent reel, as well as other assorted scuba accoutrements.

Also, you may need a dry-suit. If so, you will need a suit inflation cylinder. A diver should not use a breathing gas that contains helium to inflate a dry suit. Helium conducts heat away from the body rapidly, which can lead to hypothermia. Many technical divers use a small cylinder filled with argon to inflate their dry suits, because argon helps retain body heat significantly better than air.

The technical diving community is very small, and the training is essentially the same from one agency to another. They all place a heavy emphasis on physical fitness, self-discipline, and redundancy- the crucial basics of technical diving.

Because it is a specialty skill, it’s important to understand that there are very few technical diving instructors around the world, and even fewer Trimix instructors. For the best way to find an instructor, a web search will help you find the Trimix training you need in your area. Just remember, don’t be surprised if you need to travel to another state for training.

For whatever reason, Technical Diving International, or TDI seems to have a greater number of active instructors than the other agencies.

As stated previously, all of the agencies have similar training and standards. They just all have their own idiosyncrasies. Also, in my experience, not every course described on a training agency’s website is a course they actively offer. Do your research, read reviews, and contact the agency with direct questions that can’t be found online. 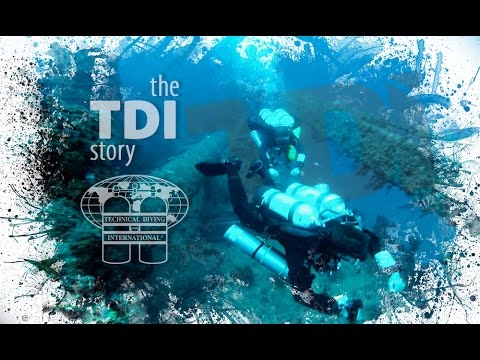 How do I know if Trimix diving is for me?

Technical divers are a unique breed of individuals. They are often well seasoned divers who have collected thousands of recreational diving hours logged. They still enjoy shallow recreational dives, but yearn to conquer new, exciting and  greater challenges. Technical divers are smart people, who like solving math problems, and paying attention to detail- crucial for this type of extreme water sport.

But, most of all, technical divers are adventurers and explorers.

If you are a safety-minded scuba diver, have a good head on your shoulders, and have a burning desire to explore deeper into the dark blue ocean, to visit wrecks few others have seen, and view animals that most people will only see on television, then Trimix is likely a sport you will enjoy!

If you’re wondering how dangerous scuba diving is, or simply what SCUBA stands for, we’ve got you covered! From the scuba diving basics, to the most technical of skills, like Trimix diving, check out our many other scuba diving tips, tricks and more here!

How Dangerous Is Scuba Diving?

25 of the Best Gifts for Scuba Divers